author of contemporary fiction spiced with romance, faith, and hope 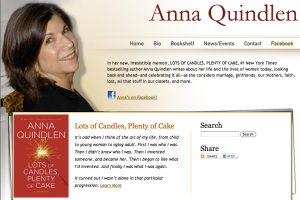 Part review, part discourse on the topic at hand, here’s what I thought of Anna Quindlen’s bestseller. Ordinarily, I’m not a fan of nonfiction, but Lots of Candles, Plenty of Cake is worth a read. Quindlen writes with candor about the experience of growing up and growing old(er) as a Baby Boomer woman.

A confused generation of women, we Boomers were raised by mostly traditional mothers and fathers, then thrown into the Women’s Liberation Movement, coped with marriage to men raised by traditional parents, slammed into motherhood and careers, crashed against the aging and deaths of our parents, and now have come to rest in our sixties. It’s been exciting to be part of an era of such change—but exhausting.

What Quindlen misses, and this is a good thing for her, is the phenomenon of serial marriages to which our generation has fallen prey. Married to the same good man for decades, she views the cultural mess of marriages from a distance and can only write about it journalistically. We’ve perpetrated serial attachment figures on our children to the point they no longer trust relationships. Worse yet, another consequence is that, as parents, our children are afraid to set boundaries with their children, to say “no”, for fear the kids won’t love them. Shame on us Boomers. (If this doesn’t apply to you—well done!)

A Pulitzer Prize winner, Quindlen’s an exceptional writer, though I got annoyed with the 75¢-New York Times-words. I wrote a doctoral dissertation, so I can use big words, but I don’t like reading with a dictionary to hand or guessing at the nuance of a sentence more than once a chapter.

Quindlen’s memoir is a glimpse into the life of a woman who has so far navigated the Boomer experience pretty well. She’s one of the pioneers of our era. As I watched an episode of BBC’s “George Gently” in which child sexual abuse in the 60s is depicted as the crime that never existed, I’m grateful for the movers and shakers like Quindlen.

But…Quindlen extolls the era as one of choice for women. True. However, some of the choices we made were really stupid—short-sighted and self-centered—free love isn’t free at all. We’re still counting the cost.

It was hard growing up a Boomer woman—exciting, but hard. A lot of what shaped me was in reaction to anger and resentment. Seems like I vacillated between outraged “Why not?” and passive acceptance. I remember a cartoon with two toddlers, a boy and a girl, looking down the front of their own diapers—”Oh THAT’S the difference in our salaries!” Not funny. Still isn’t. My boomer friends and I were often at war with our expectations and our desires.

So, are we now Invisible Women? Yes, I think we are—certainly we’re invisible to younger men, (that’s creepy anyway)—but also in the workplace. Age discrimination hasn’t changed much. In these economic times it’s tough when many older women find themselves in need of a job.

Too often we’re invisible in our marriages as the shared guilt of taking each other for granted sets in after years together.

Some of us seem invisible because we’ve just quieted down—either worn out or finally content. The next generation is making the noise now, the noise of entitlement as they scrabble toward their dreams. They too deserve their day.

Quindlen strikes a chord in us—”Never give up!” said the frog, its hands around the heron’s throat.

Quindlen says she wants more. Me too!

2 thoughts on “To Baby Boomer Women”

Connect with me on: